Sous-vide is so hype right now. There’s so many sous-vide circulators out there in the market that are pretty popular. But honestly if you ask me, sous-vide cooking really deserves the hype. According to Google it just means “under vacuum” in French - referring to the vacuum sealed bags that seal the food for a sous-vide bath.

You simply drop the sealed food into water, and water is brought up to and kept at a constant temperature by a circulator (one of the phalic things I linked above). This cooks the food in the vacuum sealed bag by bringing it perfectly to the desired temperature - no over or under-cooking. Just perfect. Every. Single. Fucking. Time. So yeah even a shitty cook like you could cook things perfectly with this method.

I got myself a nice 2” thick dry-aged prime rib chop to sous-vide this time. Steak is one of the most common things cooked sous-vide simply because it brings the entire cut of meat to the perfect medium-rare (or however you like steak) all throughout. No overdone edges on both sides because of the skillet. Medium-rare all the way through. 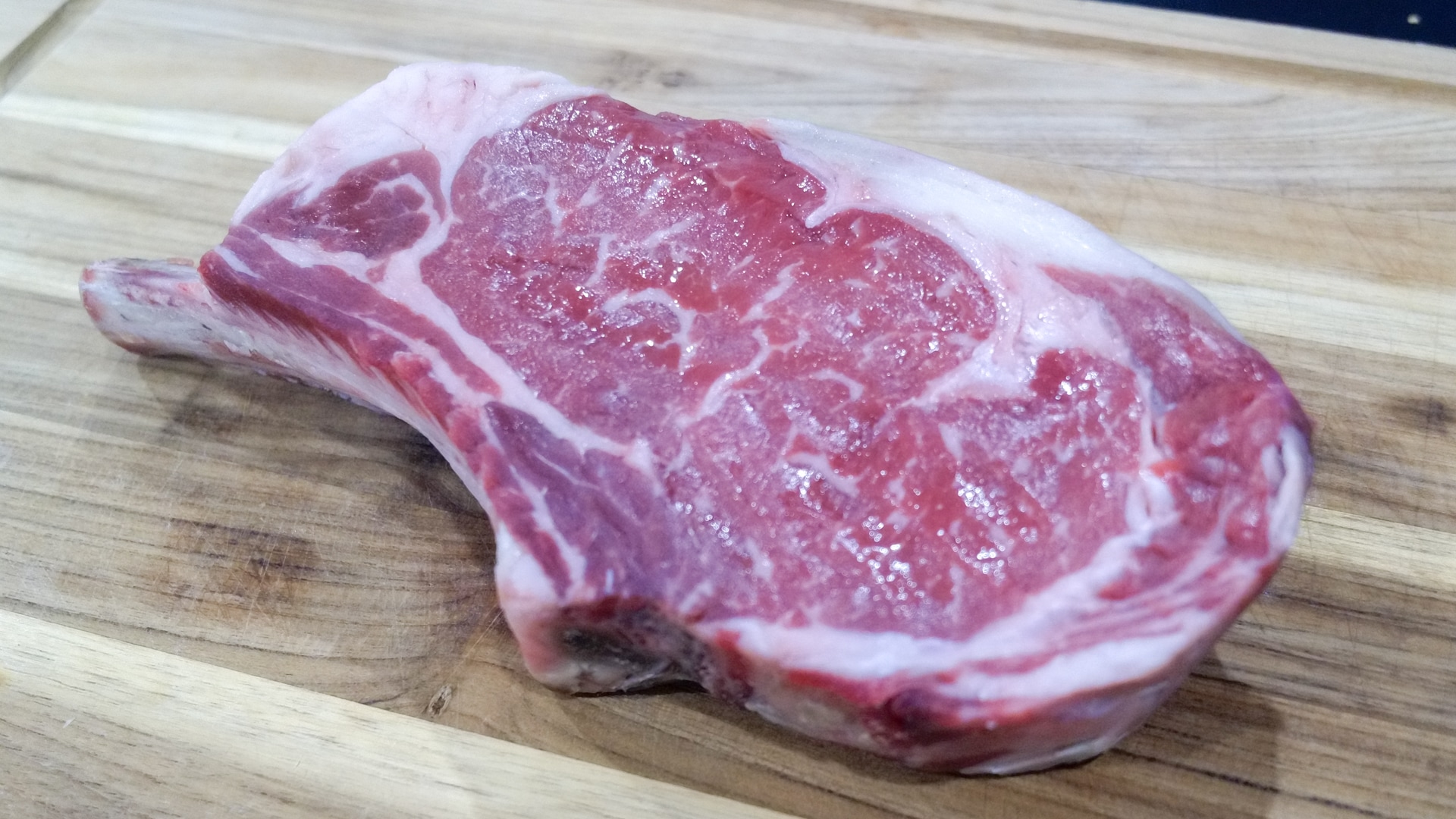 To prepare the steak for the sous-vide bath, I added some shallots, garlic, thyme, and rosemary into the bag with the steak and vacuum sealed it. Some people like to add butter into the bag too but it’s a controversial decision with proponents for and against. I personally opt to not include butter for the sous-vide bath but to sear and baste with butter at the end. If you don’t have a vacuum sealer machine thing, just stick it in a plastic ziplock bag or something similar, and while keeping the open-end open, slowly lower the bag into a bath of water. The water pressure will push the air out and create a shitty version of a vacuum seal, but it works ok. 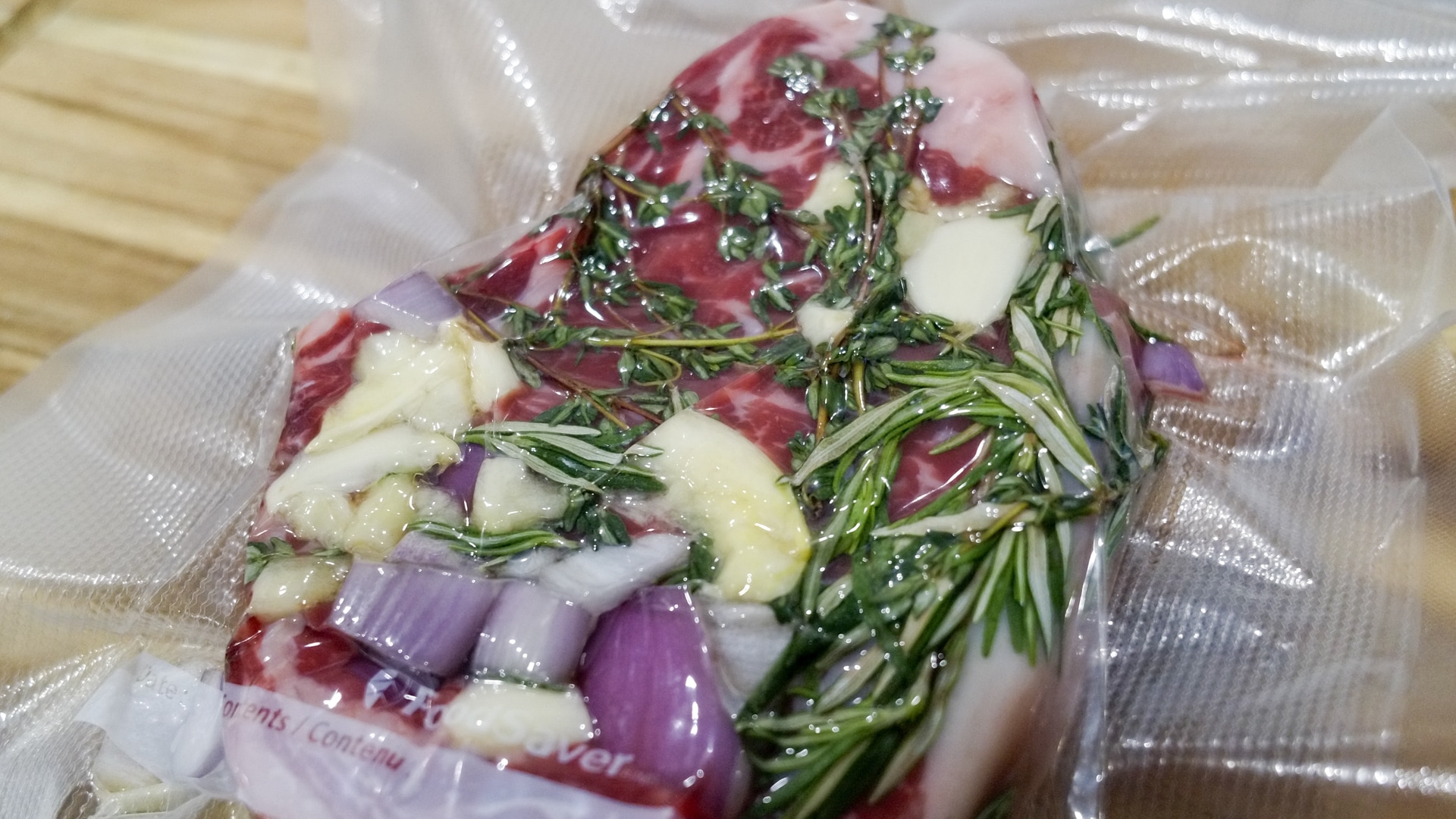 After this, you just drop it into the sous-vide bath and let it go. I set my sous vide at 132 degrees and just let it sit for 4 hours. If you’re a lazy fuck it’s perfect - just drop it in and wait. No need to babysit or pretend to know wtf you’re doing as you randomly flip the steak. Also with sous-vide the steak cooks in its own juices and doesn’t lose much moisture - keeping it juicy and tender.

Once times up (the thicker your steak is the longer you should sous-vide it but there’s no real science to time, just grab it whenever within 2-3 hours tbh), just pull your sous-vide bag out, drain the juices, remove the herbs, and pull out your steak. It’s an ugly unappetizing chunk of boiled meat at this point but don’t worry it gets better. 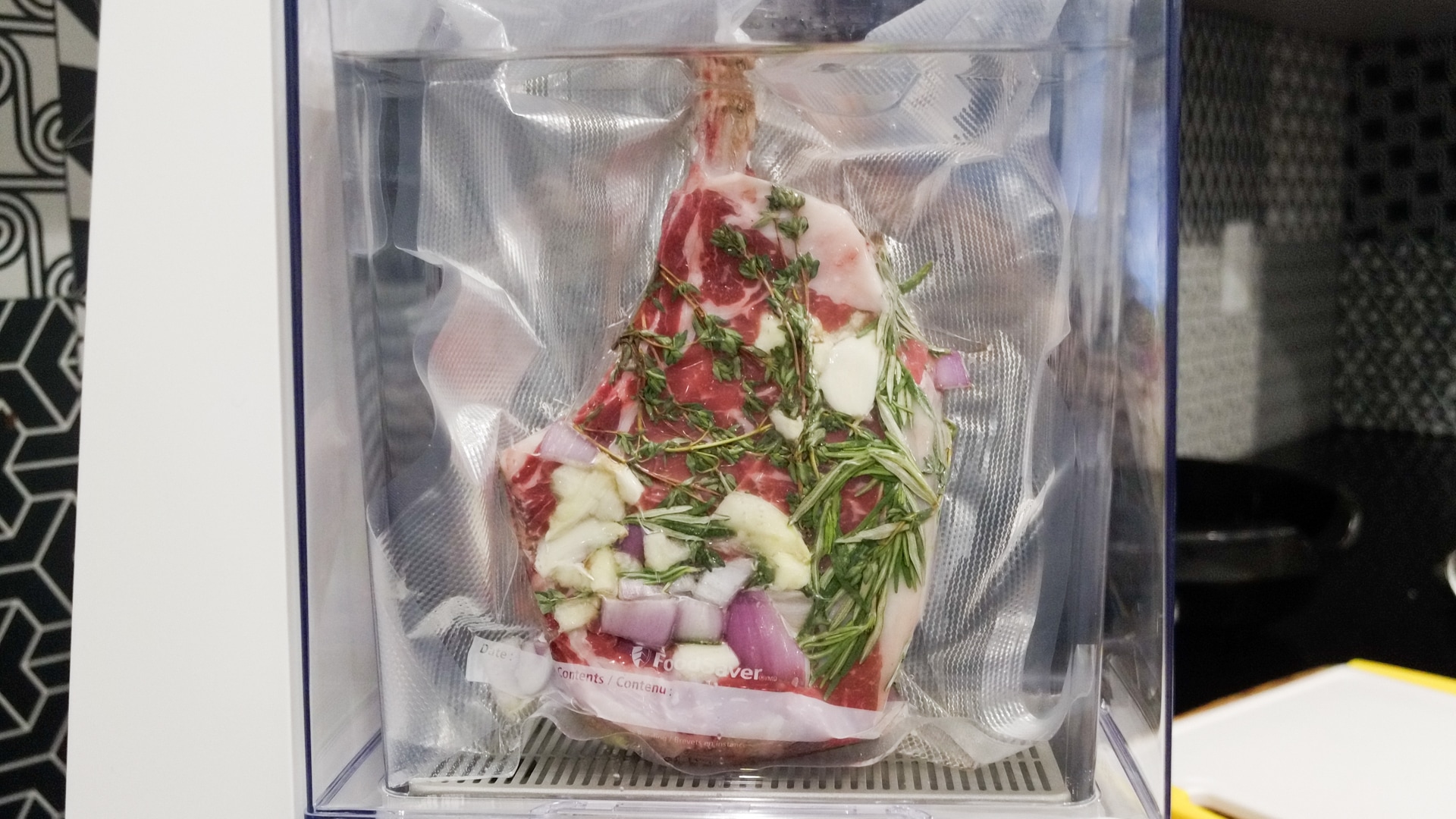 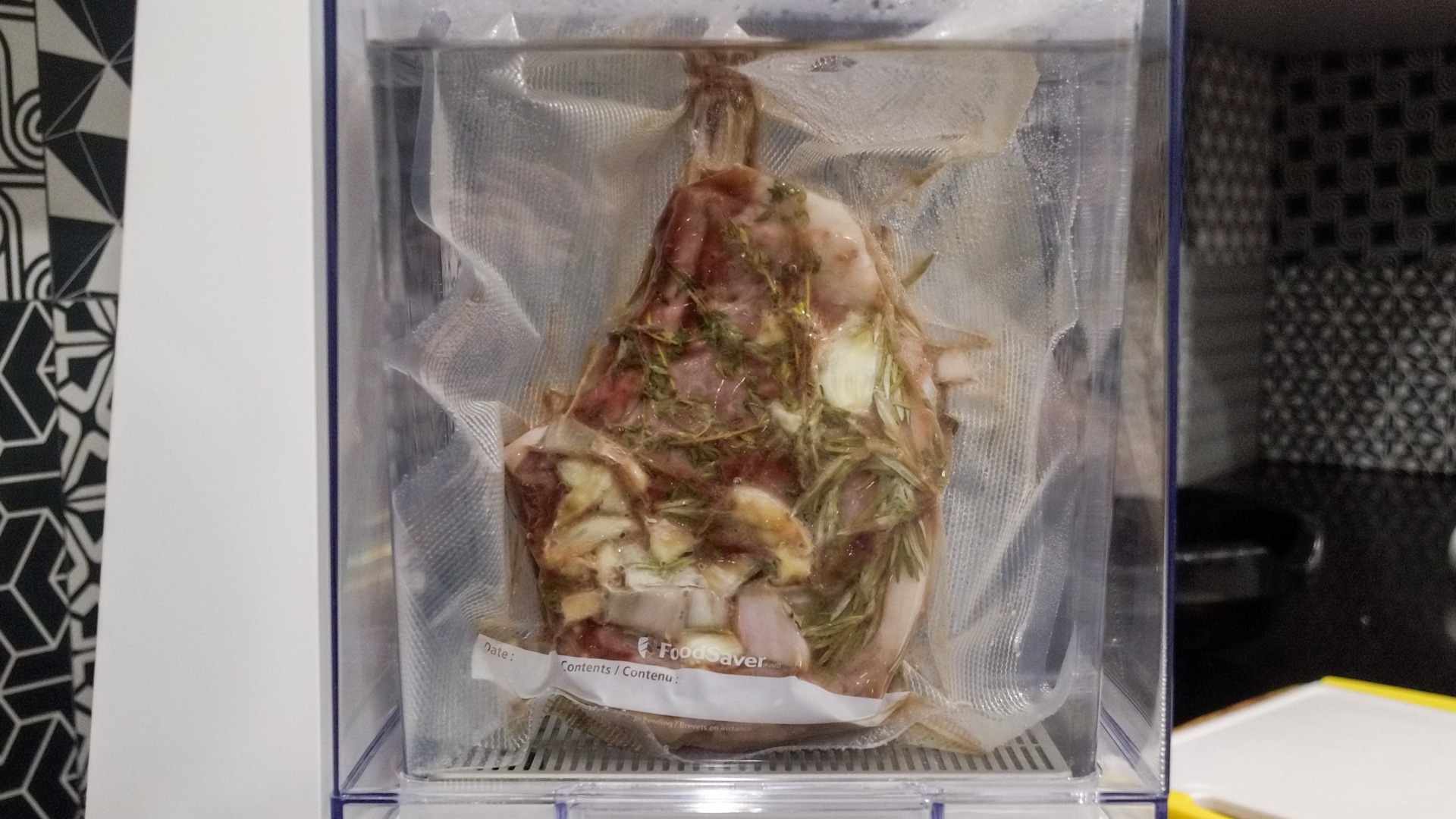 At this point you’ll want to generously season it with salt and pepper while you heat up your skillet for the sear. I added some butter, garlic, and thyme to my skillet and once I dropped the steak it, I continually spooned butter over as it seared.

Searing will turn the boiled meat into a nice normal looking steak with a nice crunchy crust. But beacuse sous-vide retains so much moisture and you’re searing it for a shorter period of time (since you don’t need to cook the steak anymore) a lot of times people don’t get the desired sear that they want. My secret to a nice crunchy sear is a double sear method where you torch the steak as it sears in a fucking hot skillet. Never ever use that non-stick frying pan bullshit to sear. You can see the beautifully seared crust in the pan. And always make sure to blowtorch the fuck out of it :) 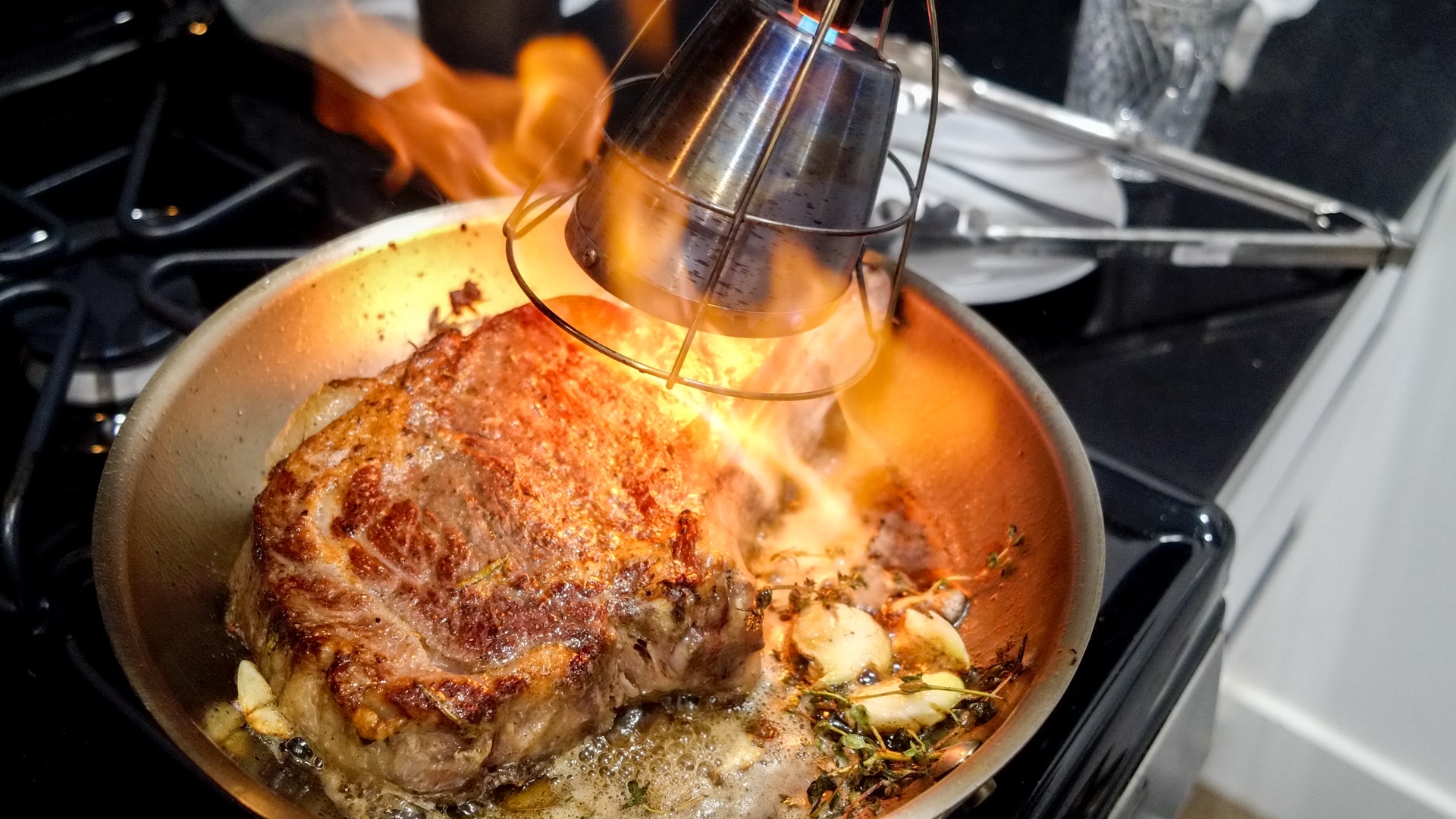 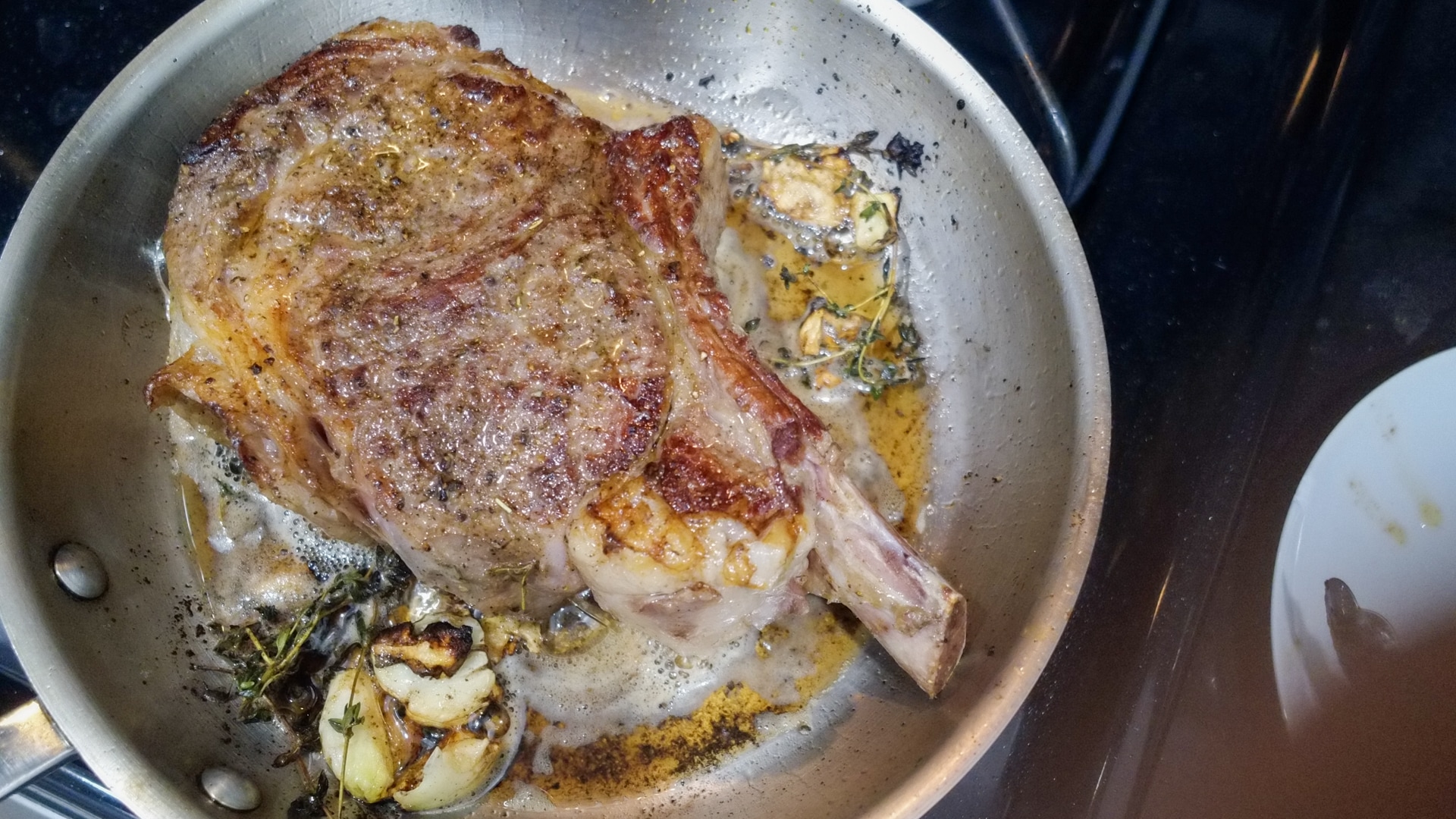 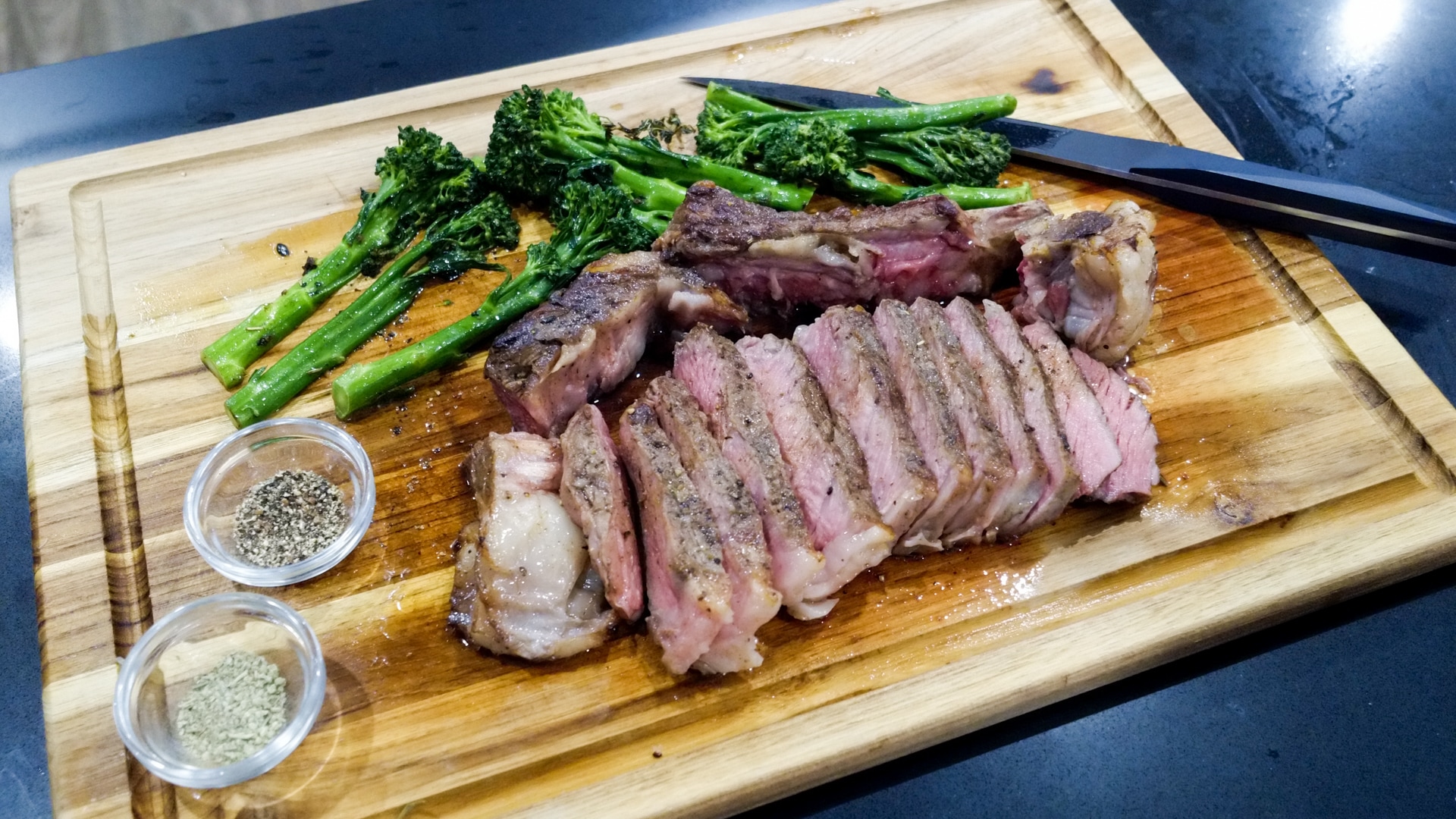